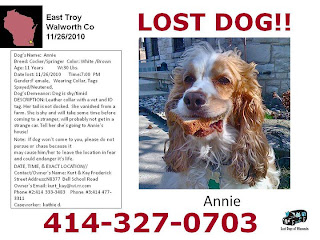 With gas approaching $4.00 per gallon and no relief in sight I want to get on my soapbox one more time in an effort to a) save lives b) save gasoline and c) show my support for the Companion Animal Legislation Act (CAPA) that is gaining support and steam around the nation.

We are really lucky in Wisconsin. We have compassionate shelter directors and staff. We have very few of the troubles that plague other states' shelters.  But, with this has come complacency and reluctance to change; and embrace new technology and ideas (the dinosaur syndrome).  Resting on our humane laurels does not save lives. Continually raising the bar and thinking outside the box does.


We STILL have shelters in Wisconsin that will not post pictures of lost pets they have impounded on their websites. This is the simplest way to save lives that I know of. Every person I speak with (other than shelter staff) cannot believe that it isn't being done. Unfortunately, they find out all too quickly if they lose their pet.  (I just saw an interesting statistic that said that 5 million pets are lost per year in the U.S. or ten per minute).

There was also great new data released this week from Pethealth, Inc.  that shows that increasing return to owner rates is lowering shelter intake; proving again that strays are lost pets, not dogs and cats that have fallen from the sky.


Annie is a cocker spaniel/springer mix that escaped from a rural pet sitter last Thanksgiving in southeastern Wisconsin. Annie is eleven years old and does not have a microchip. She is a very shy dog who could have spent a long time wandering from farm to farm, eating catfood, corn cobs and bird seed; like so many lost dogs we find. She was lost near the edges of four counties: Racine, Waukesha, Jefferson and Walworth.

She easily could have ended up in any one of those county shelters. It is a 151 mile, 4 hour round trip by car. At 20 miles to the gallon that is approximately 7 gallons of gasoline or 28 dollars. Once. Now multiply that by the number of times that Annie's owner would have spent visiting the shelters several times per week since Thanksgiving. Money that I'd rather have that owner spend on more flyers and newspaper ads to generate sightings for her dog;  in case she still is out there roaming from farm to farm.

I want to briefly explain how the stray hold system works. We are blessed with a seven day stray hold in Wisconsin. This is the time required by state law that an animal shelter must hold an animal.  This allows an owner time to reclaim it before it is put up for adoption, transferred to another facility or killed.

Animals on stray hold are often (but not always) kept separate from the rest of the shelter population for the seven days.  Paperwork is done when a "stray" is brought in and it is basically effortless to also snap a picture. Uploading the picture to the corresponding shelter software that is used for the intake information takes about two minutes when you've had a little practice. But, regardless of how easy this is - it is not being done.


None of the four county shelters (Racine, Waukesha, Walworth or Jefferson) post their stray pictures on their website. Annie's owner has even written to her state legislators describing the problem. These shelters (along with others in the state) require the owner of a lost dog to visit the shelter to see if their dog has been turned in.


Countryside Humane Society has their policy on their website:
If you have lost your pet you need to make regular visits to our shelter to see if your pet is here.


If the owner can't make the 151 mile round trip;  a nice dog like Annie will be adopted in a flash to a new home (possibly within hours of the stray hold ending), before the owner has a chance to see her picture appear on the adoptable section of the website. Am I really supposed to trust that the staff at Countryside are going to put two and two together and match Annie's lost report with a dog that is brought in? Remember, this was the same staff and management that gave  expired rabies vaccinations to 600 adopted pets last year.

Shelter directors that I have contacted use this excuse for their outdated policy:

What if somebody tries to claim a pet that they see listed as lost because they want it for themselves?


Hmm. This doesn't appear to be rocket science. First of all, reclaim fees are very high in Wisconsin. In the case of a cat - why would somebody pay a high reclaim fee when they can go down the road to another shelter in the area that has a great free cat adoption program?

In the case of a highly desirable dog (or cat);  simply hide an identifying feature in the photo and ask the owner to describe it. Or change the collar color and ask the owner what color collar the dog was wearing. Or ask the owner to bring in family photos with the pet.  I am currently trying to find evidence (either statistical or anecdotal) to find out how many times people try to claim a lost pet that is not theirs. I am thinking that it is rather low.

Hundreds of shelters around the nation put the lost pet photos online. And a huge thank you to the ones in Wisconsin that do. Dane County Humane Society recently launched a new website  that makes it incredibly simple to search for your lost pet. Hats off to them.

For the shelters that don't do it: why is it so hard? Maybe that grateful owner will donate the gas money they saved to the shelter. Do shelter directors not see the benefit to the animals, the owners AND the environment?

The Companion Animal Protection Act which has passed in California and Delaware  and has been recently introduced in Texas and Rhode Island contains a very specific section on the efforts a shelter must make to reunite lost pets with owners including posting them online. Does such a simple idea really need to be legislated?

You would think that shelters would be jumping at the chance to save more lives.  Apparently not.

We are still searching for Annie. And we will not give up.


They say the world has become too complex for simple answers.
They are wrong.  - Ronald Reagan
Posted by Kathy Pobloskie at 10:09 AM