Shortcomings at MADACC - The Veterinary Care

This is the first entry in a series of ten blogs that will focus in on current shortcomings (an understatement) at Milwaukee Area Domestic Animal Control Commission (MADACC).

In no particular order, I will try to highlight some of the apparent problems that have been brought forth by multiple sources that are in direct contradiction of MADACC's contract for services with the nineteen municipalities of Milwaukee County.

As a sidenote, I would like to point out that the volunteers and rescues that are coming forward to me with this information are caught between a rock and a hard place. They fear that exposing the truth will either get them banned from the facility or prevent their rescue from being able to pull and help more animals. I truly appreciate their courage to come forth and share their stories.

The Milwaukee Area Domestic Animal Control Commission (MADACC) will be established with the following service framework to be provided to the municipalities participating in MADACC and their residents:

1. Provide shelter for stray and running-at-large dogs and cats, also safekeeping and quarantine.
a. Include housing, feeding, veterinary care.


This sounds nice and is in line with the American Shelter Veterinary Medical Association (ASVMA) Guidelines for Standards of Care in Animal Shelters (published in 2010) which states:

"An emergency medical plan must be in place to provide appropriate and timely veterinary medical care for any animal who is injured, in distress  or showing signs of significant illness.  Staff should be trained to recognize conditions that require emergency care. The emergency care plan must ensure that animals can receive proper veterinary medical care and pain management promptly (either on site or through transfer to another facility) or be humanely euthanized by qualified personnel as permitted by law."

These guidelines are endorsed by the National Animal Control Association, The ASPCA, the HSUS and several other national organizations.

Yet, apparently MADACC isn't providing veterinary care and is even having problems diagnosing when it is required.  Here are two examples from two different rescues this fall.

1. A cat pulled by a local rescue was held at MADACC for at least seven days with this fracture without treatment. Apparently they knew of the injury but did not treat it and when she was finally released to a rescue, she was sent with antibiotics but no pain medication. The rescue immediately took the cat to their veterinarian who took this xray and recommended that the cat have emergency surgery to repair the broken femur. 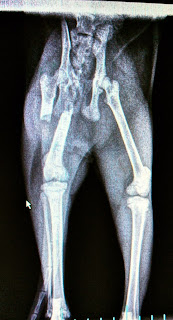 2. A small dog pulled by a rescue after having been at MADACC for ten days.  When she was transferred to the rescue there was no mention of her injuries, other than a note in her paperwork that they suspected she had luxating patellas. But she couldn't walk without dragging her legs. The rescue immediately took her to their veterinarian where xrays showed that she had a broken back and she had to be humanely euthanized. She had sat untreated for ten days at MADACC with a broken spine. 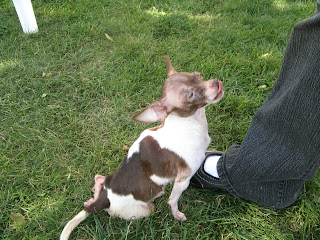 In the summer of 2010, an independent agency - the UC Davis Koret Shelter Medicine Program was brought in to evaluate the procedures at MADAAC. The result is a 140 page document full of their observations of problems and recommendations to help MADACC improve their procedures.

Here is an excerpt of the numerous problems that were noted in the veterinary department:

"Although physical exams are performed, they were sometimes cursory and may overlook significant conditions."

"Medical protocols and training manuals are either non-existent or inadequate."

"In effect, there is no veterinary oversight present which is leading the technical department to address animal health in a manner that is inefficient, substandard, and potentially dangerous to animals."


When I questioned the president of the MADACC board in early November 2012 if the UC Davis Report recommendations had been addressed and implemented he said "No, they had been put on the backburner".  I also brought up the report at the November Operating Committee meeting but I received no response from any of the members of the committee.

I would think that the responsibility of the Board of Directors is to see that MADACC is fulfilling it's contractual obligations and it's mission to the municipalities.

In summary, although the contract that MADACC holds with the municipalities clearly states that animals will receive veterinary care, I believe that both anecdotal and documented evidence from a qualified third party (UC Davis) clearly shows that the veterinary care is inadequate.

If you are a resident of Milwaukee County and are concerned about how your tax dollars are being spent and how your community's animals are being treated I suggest that you contact your alderman or elected official. Thank you for caring.


Posted by Kathy Pobloskie at 7:31 PM