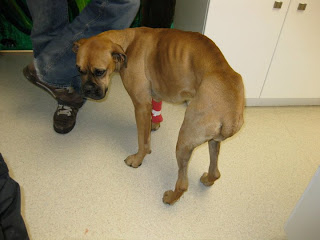 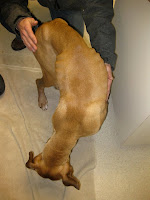 This is Mazi. If Mazi were brought into a shelter I would like to be a fly on the wall to hear the reaction from the staff, the volunteers and any public that happened to be there.
My guess is that it might sound something like this:
"OMG- How could somebody do that? How could somebody treat a dog like that." "If I knew who did that I would kill the SOB with my bare hands." "People are horrible. People don't deserve animals. They should never be allowed a pet again."
But that is not Mazi's story. Mazi is a boxer that was lost for eight days in frigid temperatures in northern Wisconsin. She escaped her yard and headed off down a snowmobile trail. There were no sightings for the entire time. She was found by a neighbor lying in the woods, very thin with abraded hocks. She spent several nights at both the emergency vet and the regular vet.
(On a side note - we are finding that some dogs have better "survival" skills than others; some lost dogs do well scavenging and living out for weeks, months and even years on their own.)

Here are some excerpts from notes that Mazi's owner posted on our Lost Dogs of Wisconsin Facebook page. The owner took all of our advice, flyering, signs, leaving food and bed outside, everything. It was heartbreaking to hear the despair in her tone as the days passed.

"Our boxer, Mazi, is still missing! If you have seen her or found her, please call day or night!"

"it's so hard to concentrate on school when i keep on thinking about my baby girl somewhere out there...."

"if you have a pet, be sure to hug them extra tight because you don't know just HOW much they mean to you until they are gone... "

"Our brown boxer, Mazi, is still missing. PLEASE keep your eyes open for her and check out your surroundings just in case she could be nearby you. She has a black rhinestone and studded collar. Call  day or night, with any information. We are heartbroken and miss her dearly..."


"does anybody or do you know anybody that has one of those hunting motion detector camera things? if you do, i would very much appreciate it if i could borrow it. there is a possibility that mazi came to the house during the night last night, but the only way to be sure is it we caught her on camera. i will pay you. please let me know!!"


Mazi is safe and warm at home now, recovering from her ordeal. I always like to debrief in my brain after each case and think about the lessons learned. I look at the pictures and realize how easy it would be for somebody to make false assumptions about her condition or care.

She could have been picked up by a stranger, taken to a shelter and assumed to be a neglected,  dumped  or abused dog, with hateful thoughts aimed towards the owner before all the facts were known. Very little effort might have been made to reunite her if Mazi had ended up in a shelter outside of her jurisdiction.

I was speaking with a board member of a northern Wisconsin shelter one day - telling her about our mission at Lost Dogs of Wisconsin and asking if they posted pictures of their lost pets online. She said "No - they didn't need to. Everybody in their county knew where to come and look for their pet. Besides they didn't have many lost dogs. They only had dumped dogs. Those were her exact words.  "We don't have lost dogs. We only have dumped dogs."  I guess I should move to that county and my job would be done.

I said "That's funny, because we have three lost dogs from your county posted on our Facebook page right now with owners that are desperately looking for them."  When she stuttered and stammered I continued -   "Did you ever think that maybe dogs walk across the county line and end up in a different shelter? And what about posting those pictures for the convenience of the people that work two jobs, or don't have a car, or the single moms that have difficulty getting to the shelter during viewing hours."

As the steam was coming out of my ears, I realized - we've come so far, but we still have a long way to go. Here was a seemingly intelligent board member of a respectable shelter without a clue that strays are lost pets. Or that the pets are sometimes not recovered in a day or two, and that coming to a shelter every day becomes an incredibly time-consuming, financial drain (not to mention a big waste of gas!).

Besides, we would much rather that the lost dog owner spend their valuable free time flyering and generating sightings rather than driving to and from the shelter. If there is the hint of a possible match from the on line photos - then a trip to the shelter would, of course, be required.

So, please remember Mazi's story and when you see a skinny, unkempt  dog ask first - "Is this a lost pet?" Don't just assume it is an abused, dumped dog.

Also, please ask your local shelter to post the pictures of lost pets on their website. Remind them that this is now the law in Delaware because it has been proven to save lives. Animal control is YOUR tax money and/or privately funded animal shelters are run with YOUR donations.
Shelter directors - please make sure your board members are staying educated on progressive, lifesaving methods of animal welfare. They should be part of the solution, instead of  part of  the problem.  They should be more than fund-raising, do-gooders in the community wanting a feather in their cap.

Welcome home, Mazi! Your family really, really loves you.
Preconceived notions are the locks on the door to wisdom. ~Merry Browne 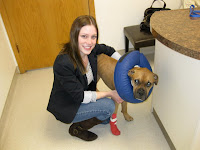 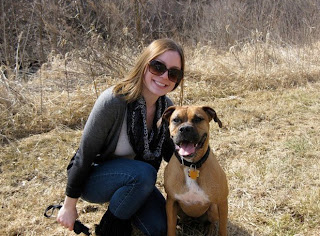 Posted by Kathy Pobloskie at 7:47 AM