I presented the following information on Tuesday, July 15 at the MADACC Operations Committee meeting.


My name is Kathy Pobloskie and I am the Director of Lost Dogs of Wisconsin. We are an all-volunteer organization committed to reuniting lost dogs with their owners.  We receive lost and found reports from around the state and from January through June 30, 2014, we have helped reunite 1004 Wisconsin dogs with their owners.   Our 70 plus volunteers personally contact every person that files a lost or found dog report to give them advice and support based on what we have learned from the successful reunions of several thousand dogs since we started in 2010. At Lost Dogs of Wisconsin, we strive to maintain good working relationships with shelters and believe that through teamwork we can help more lost dogs get home.

Recently,  we have received several troubling stories from Milwaukee county, and today I want to tell you about this one – an unnamed dog  (No A281263) that was found by a Good Samaritan. I also want to mention that I did email Ms. Sparapani  with our concerns about this dog, but did not receive a reply.

On June 4, a Glendale resident was walking his two dogs in Lincoln Park.  This black and white dog approached his dogs in a very friendly manner and began to follow them.  When I spoke with the finder,  he described the dog as very friendly, obviously well cared for – of good weight, and wearing a black nylon collar but no tags.  He proceeded home with the dog following behind. When he got home this dog was initiating play with his two dogs, and was even friendly with his cats.  He filed a report with us on the evening of June 4 which we posted. 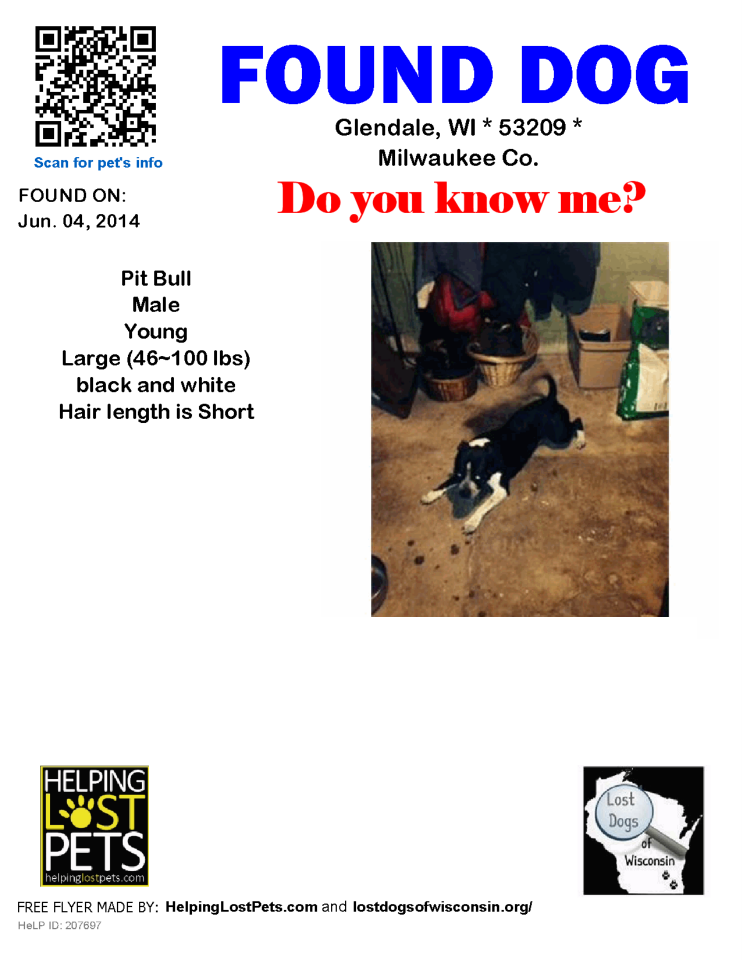 He also sent a picture to MADACC ‘s Facebook page in the hopes that an owner would be found quickly which was shared  on the Stray Animals of Milwaukee County’s Facebook page on June 5th. 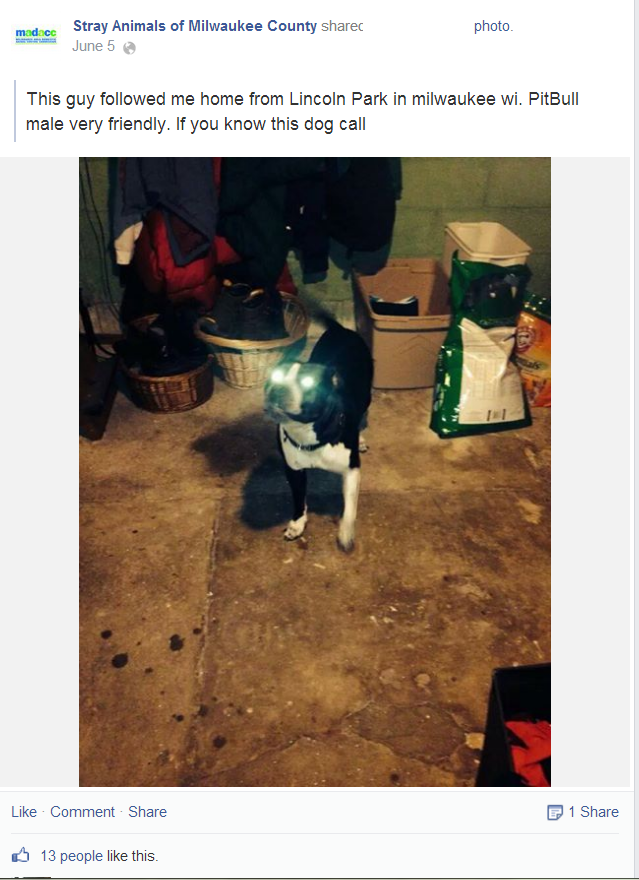 Since the finder already has two dogs and two cats and couldn't keep this dog himself, he wanted to find the owner quickly or help facilitate a new home for the dog.  He felt bad keeping the dog in his garage, and since he knew that MADACC was the official stray holding facility (information that we provide) he brought the dog to MADACC after work on June 5th.  I sent in an Open Records Request for the information on this dog and it shows that the dog was impounded at 5:32 p.m. on June 5th.   The finder mentioned that he had a friend that might be interested in adopting the dog if nobody reclaimed him and he was told to check back after the 7 day stray hold was up.

On  June 5th the dog received an intake exam and was found to be normal.  It was estimated he was 2 years old and his weight was 68.5 pounds.  It was noted that he had a black nylon collar on. 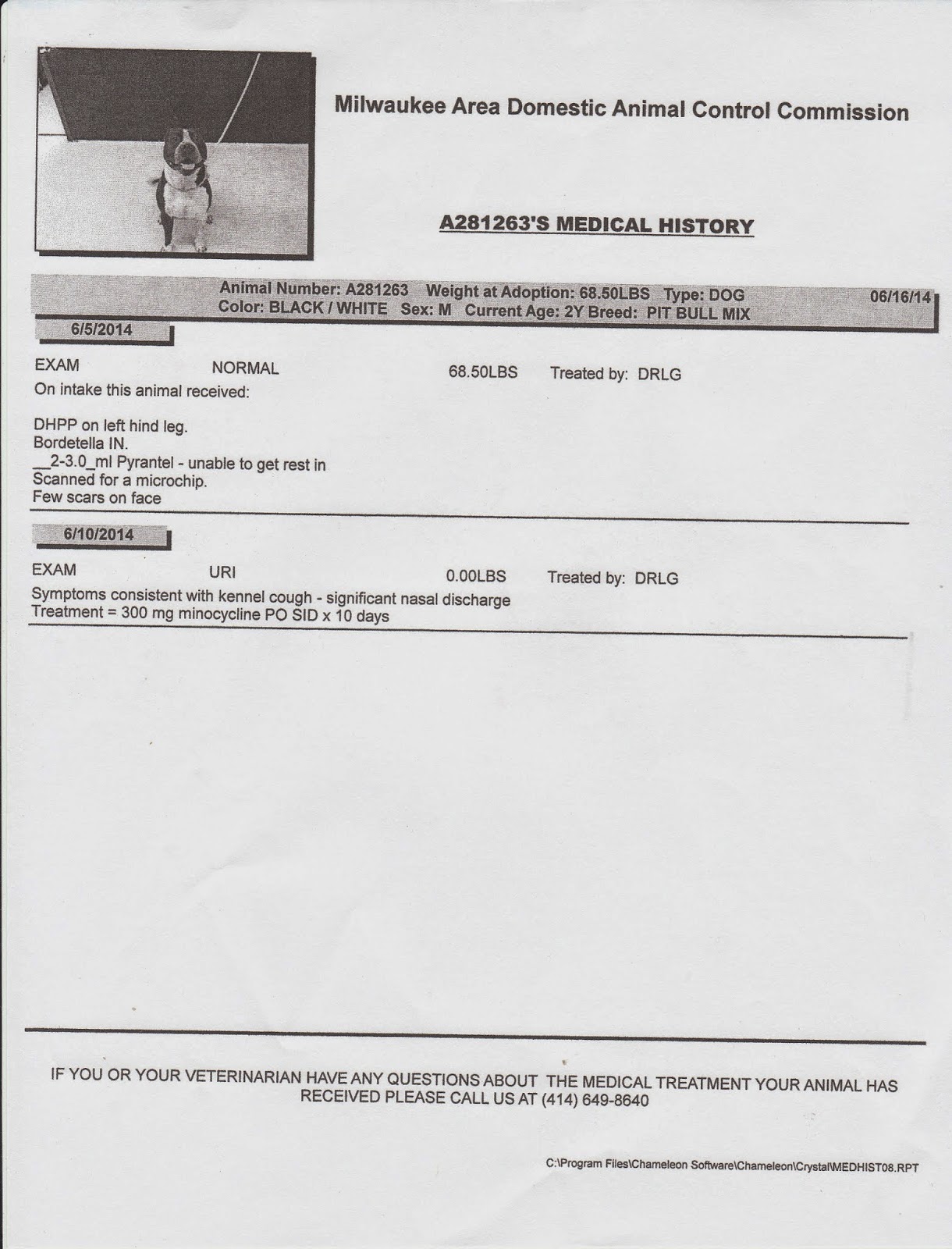 Twice during the week the finder called to check on the status of the dog and to inform MADACC that a friend would like to see the dog and possibly adopt.  He was told to call back after the seven day stray hold was up.

On June 10th the dog apparently showed signs of kennel cough and was put on a 10 day treatment of antibiotics.

On June 11th, Lorraine Sweeney evaluated the dog and said he failed dog to dog.  That is all it says – there is no written behavior evaluation or any other details. 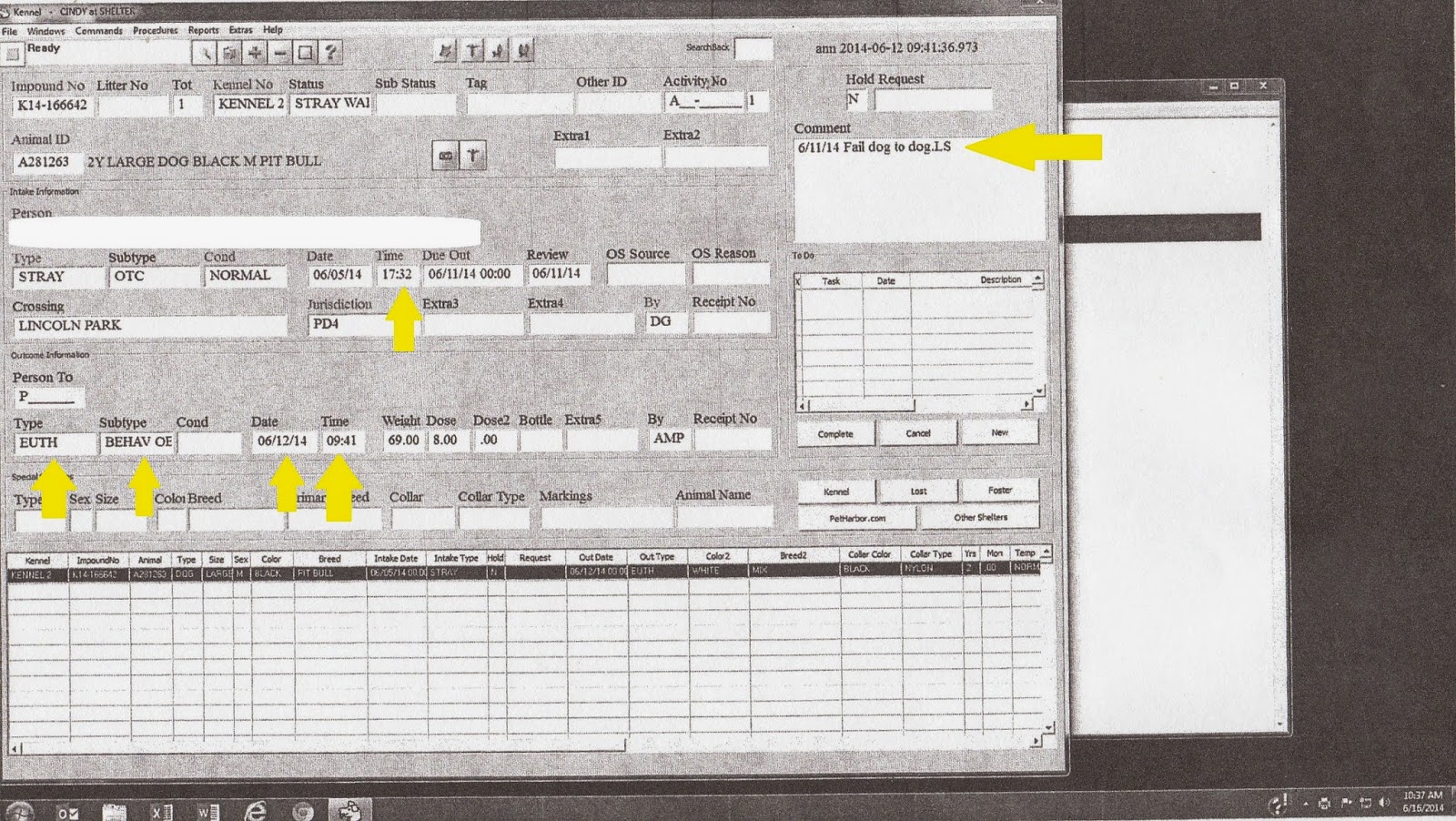 On June 11th the dog’s paperwork was also stamped as being MADACC’s property. 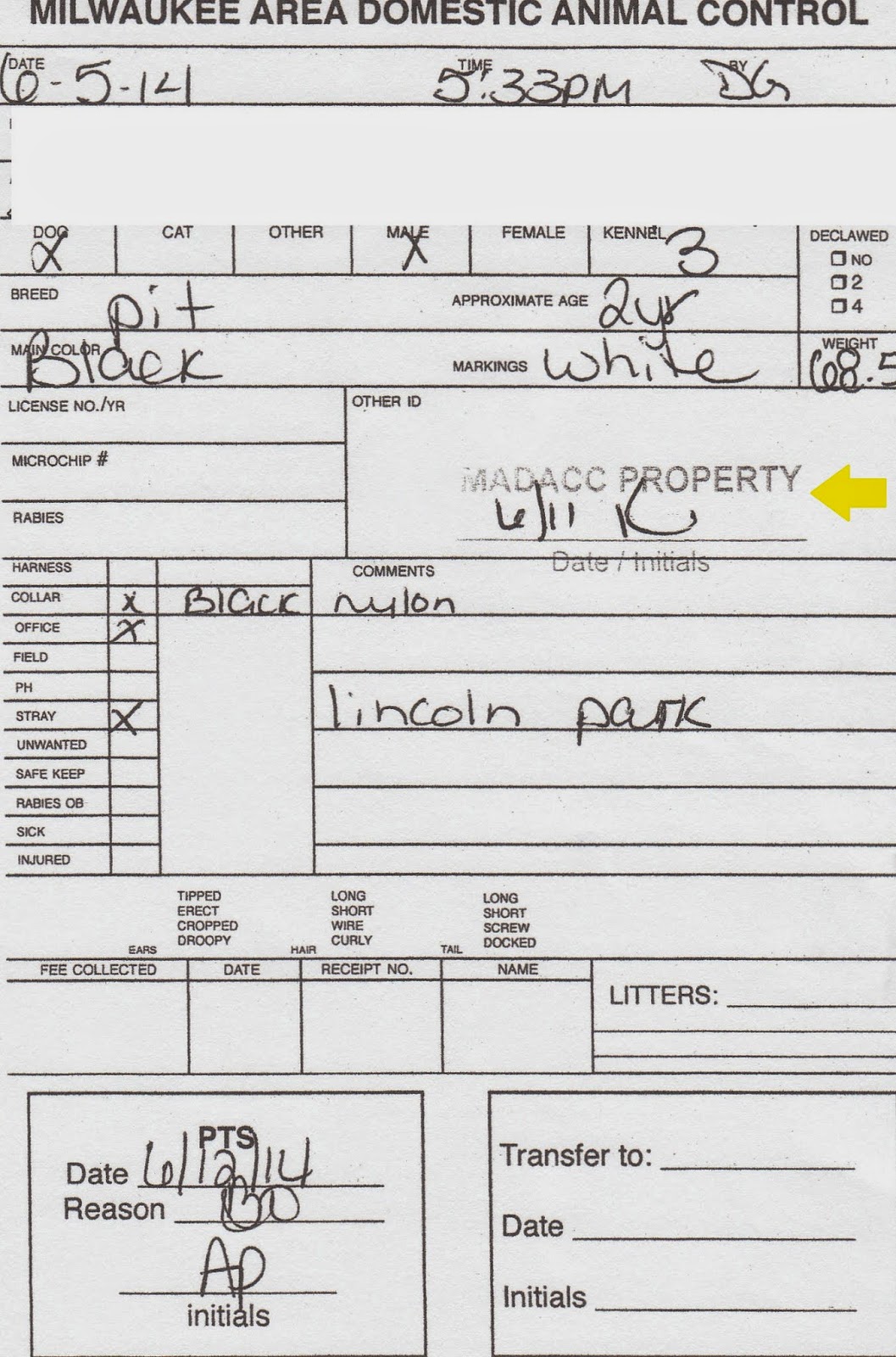 On June 12th the finder called to check on the status of the dog because he knew that the 7 day stray hold should expire at 5:30 that afternoon and he wanted to make arrangements for his friend to come in and see the dog.

But it was too late. He was told the dog was already dead.

In closing I want to read the following quotes from Ms. Sparapani from the Listening sessions:
The first is from the June 27th Listening session in West Allis:
"Decisions to end the life of an animal are not taken lightly here, and we are working very hard to reduce the number of animals that are euthanized."

The second is from the March 24th Listening session in West Milwaukee:
"Our behavior assessments are some of the most liberal around because of the fact that we know the dogs are likely showing their worst behavior because of fear and stress while at MADACC."

In closing, I would like to point out that there are some very troubling aspects to this story.

I am hoping that  dog A281263 did not die in vain. Please ensure that changes will be made to MADACC procedures to ensure that this doesn’t happen again.