Who's On Board for a No Kill Nation? 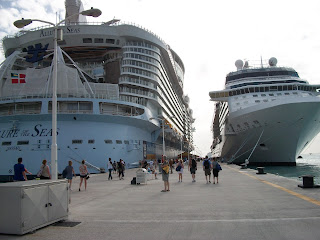 Good Morning,
I'm sitting on the 14th floor of the aft deck of the Celebrity Solstice as I write this, watching the deep blue waters of the Caribbean ocean slide away behind the cruise ship. My husband and I are enjoying an anniversary cruise, a gift he gave to me that he says is payback for the horrible winter months we spent last year while he recovered from total knee replacement surgery and I was his nurse and chauffeur. Hey, for better or for worse, right? Well, I'm enjoying the better now.
This is our first cruise and the jury is still out on whether it is our type of vacation or not. We're generally more of the national park, drive and hike, type of people. But regardless, I defy anyone; even those who hate cruising to not be amazed by the efficiency with which the cruise ship staff house, feed and entertain over 2500 people while still making you feel like you're the most important person in the world. I'm still trying to find a way to stuff our cabin steward into my suitcase when we leave.
Yesterday, we were docked next to Allure of the Seas, the largest cruise ship in the world, making our little ship look like a Yorkie next to a Great Dane. And still, people we talked to in port said the service on board that mammoth ship was excellent also.

So what does this have to do with animal sheltering? Somehow animal sheltering staff seem to think that they have cornered the market on "impossible" problems to solve. That they alone have staff, logistics, inventory, and customer service problems that are unique. Sorry, I just don't buy it and when those types of lame excuses cause shelter deaths in our communities it makes me furious.

How many times have I walked into an animal shelter and not even been acknowledged by a staff member or volunteer? One local shelter has a comment card at the front desk, a great idea. It has check boxes so that you can check off how many minutes you waited before being served. Funny thing is - there is no box for NEVER, which was my experience. Even though there were several staff and volunteers in sight, chatting amongst themselves; nobody ever acknowledged that I was there. I finally had to figure out which door to go through to see the adoptable dogs on my own.

Inventory and logistics: Somehow cruise line food and beverage managers figure out exactly how much needs to be on board. I'd bet they'd chuckle at what animal shelters consider monumental problems - not enough small dogs in the north, too many kittens at one time of the year - not enough at another; a shortage of canned cat food some days; too much laundry on Mondays.

On the first day, my husband and I sat on deck and watched the K9 unit sniff the cargo as it was being loaded on board. Hundreds of pallets of food and supplies, let alone getting 2500 people's luggage delivered to their stateroom door in less than two hours. Not forgetting, they had just docked and unloaded 2500 people from the previous cruise at 7 a.m. that same morning. Plus... the busy cruise port had eight other ships leaving at approximately the same time as ours. Delivery trucks, airport and hotel shuttles, taxis, all getting to the right place at the right time. It boggles my mind. Getting all that food, drink, luggage, fuel on board for on time sailings. And they do it every day. Safely and efficiently.

Customer Satisfaction: The ship's crew always has the attitude of how they can make it right for the customer. Last night my husband and I were seated in one of the ship's speciality restaurants - serving Asian fusion cuisine. The older couple at the table next to us were experimenting for the first time and had obviously never had sushi before. The wait staff and maitre' d couldn't have been more helpful. They explained the menu, brought samples and kept a good sense of humor - even when the couple curled their noses at some of the food. Does the staff at your animal shelter do that? Or do they roll their eyes and comment on how some people just "don't GET it" when they have to explain housebreaking and exercise requirements.

Needless, to say - the couple at the next table left satisfied - happy they had tried something new. They may not eat sushi again for awhile , but I bet they won't have any problem recommending the restaurant to friends. Wouldn't it be nice to think that everyone that left our animal shelters and rescues felt the same way? Even if they didn't choose a new pet, that they felt like they had been treated respectfully and patiently?

So other than the feeling of being well sanitized, I kind of enjoy this pampering. Some people would say it's over indulgence. And I'm usually one of those types of critics. I often gauge prices in "spay and neuter" economics. My mind is calculating - just think of how many spay and neuter surgeries that could have paid for. But then I  smack myself in the head for that narrow minded view and think of the bigger picture. Commerce makes the world go round. The money spent by tourists both in ports and onboard helps animals also. Staff, families and townspeople whose lives are dependent on tourism have pets. When people have a better way of life - so do their animals.
And with that - I'm signing off from the Celebrity Solstice. Good Day.
Posted by Kathy Pobloskie at 5:28 PM