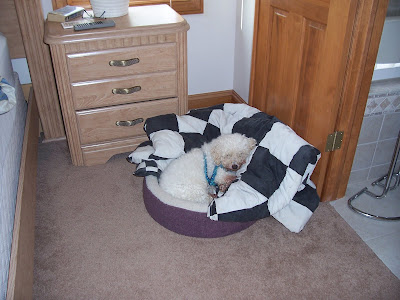 This is Aspen. He was one of the last remaining Bichon Frises from the Puppy Haven buyout by Wisconsin Humane Society in 2008. As controversial as this was,  it did result in the closure of this breeding facility and you can read more about it here in the Milwaukee Magazine article entitled  Puppy Hell.

Aspen didn't meet the criteria for adoptability at a local shelter. He was too shy. He was not fear aggressive and would never have bitten anyone.  He was just incredibly shy and shut down. He was transferred to Bichon and Little Buddies Rescue in Mukwonago to have another chance at life.

Aspen just needed some time and some understanding. Car rides were first because he had no idea how to walk on a leash.  He would sit in his little seat belt and we'd go to the McDonald's drive thru for a coffee. Then I'd park and hold him in my lap so that he could watch the people coming and going from McDonalds and the grocery store. It was the first time I ever saw any life in his eyes. One of my friends said - "It's like he has no soul. There is nothing when you look into his eyes."

I used to take him back and forth from the rescue but pretty soon I was taking him home for sleepovers. He enjoyed those a lot. He also loved the dog park and it was the first time I ever saw him run. It was also the first time the other dog park patrons saw me run (not a pretty sight). I would run across the open field yelling "Run, Aspen Run!" trying to encourage his little stiff legs to go faster than a trot.

His eyes started to light up for meals and treats and pretty soon he was jumping through a hula hoop and running through an agility tunnel in our backyard.

I remember telling prospective adopters "Aspen is really, really shy, but he knows how to jump through a hoop!'' in my best salespitch-type voice. A useful life skill, indeed.

By this time Aspen was living full-time at our house. We needed to make arrangements for our dogs while we went on our fall vacation to Best Friends and the No More Homeless Pets conference. An interested family said they would try him at their home while I was gone.

Aspen struck it rich. The wonderful, caring family decided he was a perfect fit for their quiet household and lifestyle.  Although I miss him tremendously, he is living the life he deserves. Something to erase those first five or so years of his life that must have been so horrible. The years that removed any expression, any "soul" from his eyes.

So here are some pictures of Aspen with his new family who don't think of him as unadoptable, just adorable.


Posted by Kathy Pobloskie at 5:41 PM