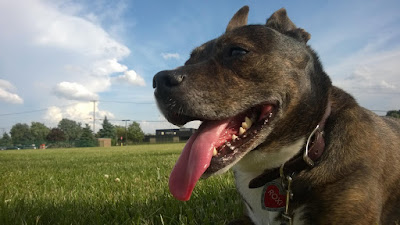 I delayed writing this blog until after Pit Bull "Awareness" Day in late October because the usual critics would have dispensed the usual criticism for raining on their parade.  But I want to throw out some food for thought because what might have been a good idea five years ago may not be such a good idea any longer.

Are Pit Bull "Awareness" Days a help or a hindrance to our cause?  Advocates are asking their legislators and the public to treat all dogs as individuals.  If we don't want pit bull terriers to be singled out for breed discriminatory legislation, then why are we doing it with special days and events?   We're working really hard to convince the public that all dogs are individuals; and that BSL does not make our communities safer.  Having "Awareness" Days sends the opposite message.  Just sayin'.

There have been several good blogs written on this subject by Animal Farm Foundation.  The links are below:

The Buck Stops Here:  Ending the Cycle of Canine Discrimination

A Closer Look at All Dogs Are Individuals
Posted by Kathy Pobloskie at 12:24 PM